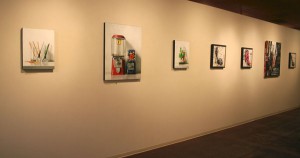 The 40 & Under show is up at the Elliott Fouts Gallery and runs until September 3. If you’re in the Sacramento area, be sure to check it out. There are some great artists participating and I’m honored to be sharing the gallery space with them.

I’ve been trying to balance working in the studio and enjoying the summer. Every other week we’re out visiting family, going to weddings, the lake, the park or pool all day long… every year that’s a serious challenge for me as I’m always excited and anxious to keep things burning along on the easel. Breaks are needed of course, it’s the frequency that drives me a bit nuts. 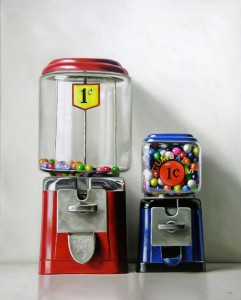 This is the third piece of three that will be showing in the group show 40 & Under at the Elliott Fouts Gallery from August 7 – September 3, 2010.

I’ve had these gumball machines for years, sitting in the studio. Initially I bought only a small amount of gum because, well, it’s intimidating thinking of painting them full. It’s a small form of torture for my kids. Gumball machines high on a shelf, being told “you can’t eat dad’s work”. So the gum became stale and dusty.

Until I decided to paint this piece and I needed more gum to fill the small blue machine. I took the machines down from the shelf and since I now had a surplus of gum and a surplus of pennies, I let the kids at it. They kept returning to the studio, within minutes of their last purchase, to let me know that they either dropped their gum or it ran out of flavor. Or that they got two purple ones in a row and were hoping for an orange so, here we go again.