I started painting tricycles nearly a decade ago.

Very early on in my fine arts program there was a project where we had to select an object as an idea and work with it over and over, repeating the image in different styles, mediums and formats. A friend had a fantastic ancient tricycle and it just resonated with me. I painted it in a classic realist manner, but peeled away all the surrounding imagery and focused on the tricycle alone in a straight-forward visual language stuck with me and never left. 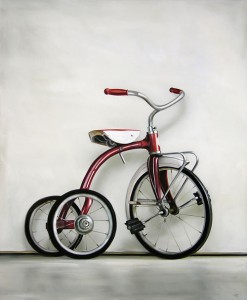