Throughout the course of my painting career, I have consciously drawn influence from a broad range of arts and culture and from various disciplines beyond traditional representational painting, and it was an honour to have the editors of Aesthetica Magazine pick up on my paintings and see how they would converge with the other work in the exhibition that included large scale photography, contemporary sculpture, mechanical installations and sound and video projections.

All of my subjects are chosen with an intention to draw connections from the earliest still life paintings in the Western tradition to the current way objects are presented in various mediums. Beginning in the Middle Ages, through the Early Renaissance and on through the Dutch Golden Age of painting the painters were all influenced by the physical world around them. The aesthetic they created was directly a result of the space they were in. Their world was illuminated by small windows and candlelight. And thus, it was low key, the chiaroscuro that we have come to know and love and shaped the world of realist painting.

However, in my studio, I am surrounded by five very large windows and high ceilings and I only work by natural light — my world is high key, bright and well lit. My paintings are a response to the physical world I am in, giving them an aesthetic that is the result of my space.

Presented like artifacts, I compose my subjects with strict symmetry and balance. Multiple clocks and cameras drive the repetition of shapes and graphic design, but also the theme that underlies my intentions behind my paintings. Middle Ages and Early Renaissance still life were full of religious symbolism, each subject carrying meaning, and were easily interpreted and understood by scholars of the time.

The clocks I paint are more than just collector’s items; they are akin to the symbols of ephemera in Dutch vanitas paintings — which were presented with several dark and foreboding warnings to viewers. Rather than rotting fruit, wilting flowers and human skulls, and the overabundance of jumbled objects on a table I display the clocks on a clean white shelf, hoping the simplified presentation of recurring forms locks the viewer in for a time of observation.

Likewise, the cluster of cameras has a multitude of tiny details and numerous lenses focused on the viewer. The cameras are all collected from vintage and antique shops. I always find myself feeling melancholic when I find a camera to use as a subject and think of the fifty years that have passed since the camera was bought new and taken on vacations, brought out during holidays or family gatherings. And I am left wondering about the cameras we keep in our pockets. Four people together can now have a dozen camera lenses with them, many of them pointed at themselves recording staged and filtered lives. Will the phones and cameras in our pockets come across as charming and enduring fifty years from now? Will scrolling through fifty years of someone’s Instagram feed be a modern-day lesson on the transience of youth, beauty, and life in general?

My three paintings were shown alongside several video and sound installations by artists from around the world. One of the artists even uses vintage 16mm film cameras to capture her images. After being processed the images are projected digitally. And so my painting of an eighty-five-year-old 16mm film projector as an artifact fit right in with the other work.

I was left to wonder about all the technical aspects of the various works in the exhibition. How would they fare over time when the equipment used to show them becomes obsolete? What is the legacy of art that cannot be seen or experienced? It was not lost on me that around the corner from our work, in another gallery space, there were four-hundred-year-old paintings heeding warnings and telling stories.

With these three paintings, I reach into the past to look into the future. Simple, straightforward compositions showcasing familiar yet useless objects bring the themes of the fleeting nature of life, the warnings of our vanity and the inevitably of obsolescence.

I was asked at the reception for the exhibition why I wouldn’t just take photos of the objects instead of painting them. The answer is simple. The process of painting connects me to the artists of the past and makes me understand their objectives. The long, slow, arduous process of painting is a meditative practice and allows me to travel on the bridge from that past to think about what the future may bring.

This past week I took over the Elliott Fouts Gallery Instagram (@efgallery) as their featured artist for the month of July, 2015.

If you happen to have Instagram on your phone, you can find me there as @xmarksthestott

On July 11, I was at the reception for my latest solo exhibition at the EFG. I talked to many collectors about how I work, my studio space and life as a painter. END_OF_DOCUMENT_TOKEN_TO_BE_REPLACED

The first time I started painting books, they were simply used as props. I had very traditional still life subjects (fruit and the like). Books were simply there to add some new dimension to the paintings.

I first started by using my own hard cover books with the sleeves taken off. You can see some of my early book paintings here, here, and here.

My own library of books had no character. They were clean, crisp and new. My mother-in-law has an amazing collection of books in her library. I borrowed some of her antique books and started using them — check the early ones out here, here and here.

Then it dawned on me. Some of the books from my MIL’s collection had these fantastic titles. The books once belonged to a young law student who was studying in 1905. These ethics and philosophy books took my work in an all new direction. The books were not just props. They were the context, the narrative, the reason to paint.

I made my way to one of the antique shops I frequent and stumbled upon a children’s primary reader It’s Story Time. Felt like magic. I was able to juxtapose the book with the lofty legal tomes. An interesting dichotomy. You wait for something like this to come your way when you paint for years. Something that you know is yours, and becomes direction that you can follow for years.

Then I began collecting children’s primary readers. I’d pop in to antique and vintage shops and pick up the odd primary school book. Slowly adding to my collection. Using them to tell the stories in my paintings. Using the books to add colour, ideas, structure to my work.

Authenticity is something people can feel and understand in an artists work. The few times I’ve been asked to invent or fudge book titles, it felt wrong. It’s not what I want to do as an artist.

Having the actual books makes the work authentic. I’ve done many book paintings and I’ll continue. They really do feel like my own unique offering to the vast world of painting and art.

I put details in to the books that make the paintings more autobiographical. My children’s names in place of publishers imprints, anniversary dates, all these bring your work to a different level. In a way, these details breath life in to painting.

When you paint in a realist style and most people are looking at your work via a computer, iPad or smartphone screen, I always here “wow, that’s so realistic! I can’t believe it’s not a photo!”

When I’m standing with someone looking at the actual painting in my studio or in a gallery, they see my work is far more painterly and looser than they first thought.

Today I began a painting with a book, the “Manual of Psychology” as one of the subjects. By an author who’s last name is so similar to mine that I was thinking I could be very sly and sneak mine in instead, we’re just one letter off. But I won’t because I claim no authority on the subject of psychology.

I’m fortunate to have an antique shop a block from my house. However, I’m a little worried about how long it’ll continue business, as the fellow who runs the place looks like he’s been at it for about, oh, 150 years. When you enter the shop you have to courteously announce your presence because I’m not so sure he can actually turn to see if someone has entered. If I were a portrait painter I’d try with all my might to capture this fellow. I recently read The Lathe of Heaven in which a tortoise-like alien owns and operates an antique shop… well, lets just say that entering the shop near my house leaves you wondering if you’re trapped in a science fiction novel and your dreams are coming true.

I picked up the book “It’s Story Time” at the aforementioned shop. I think its title and subject contrasts perfectly with the thick, heavy subject and title of the “Manual of Psychology”. I’ll put that down in the notebook with ideas for future paintings. 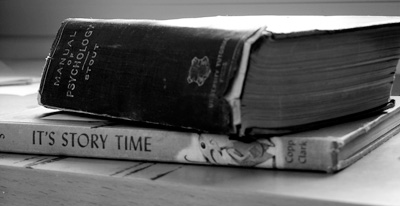 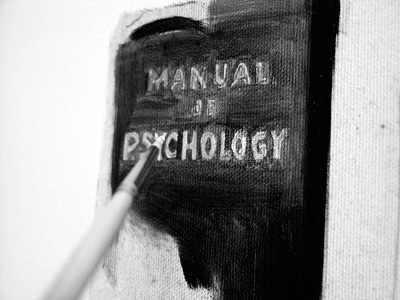 I need to take breaks, frequently, from the easel. Stepping away, focusing on something else, then taking a glance over my shoulder to the easel to see if the past hour or so was a complete waste. I used to take it pretty hard when the painting was struggling. I used to think everything needed to be fixed now, but I’ve learned that it’s wiser to wait about 24 to 48 hours to pass. I no longer experience the feeling of wanting to stick my foot through the canvas. I think I must be getting older.

I’m lucky to be doing what I do. Those nasty news headlines about hundreds of thousands of people losing their jobs, joining the millions that already have… well, I guess no matter what, I won’t lose this painter life.

At the bank, I was cornered by the well meaning manager. Several brochures were lunged in to my reluctant hands and questions about my retirement were posed. I just finished telling her I was a painter, an artist, you know, like back in the olden days. I won’t retire. I’ll keep doing the same thing until the bitter end. And I already save so I’m not worried and that’s because I’m really cheap, just ask my wife.

That did not compute with banker. Artist does not understand the rules.